Home-Owner-Ist In Chief on top form...

Wealth taxes – on property(1), cash, equities and other assets, including unrealised gains – always mean that some people will end up paying more in tax than the amount they earn (2) – while this might sound crazy, it is a feature, not a bug, of the system. The whole point is to make people poorer(3) and to reduce their overall wealth.(4) By contrast, income taxes and other levies on new income – as well as on realised capital gains – only reduce the increase in wealth, rather than seizing previously earned and taxed income (5). There is a big difference between those two approaches.(6)

Yes, this man wants you to vote for a system which makes you poorer, because it enables his sponsors in The City to become ever richer.

A few simple facts which he would never admit:

1) No sane person is proposing a general tax on wealth; they never raise much and collapse under the administrative burden of precisely defining and measuring "wealth". Which is why we have income tax on dividends and interest income, that does much the same job (i.e. if shares yield a dividend of 4% and higher rate income is 25% of the dividend received, that's like a 1% annual wealth tax).

Like all good Homeys, he insists on using "property" as synonymous with "land" and on bracketing in land wealth with private wealth when it is fundamentally different. Land "wealth" is merely a measure of the total annual rental value of land, which as we well know is created by the actions of the whole nation (or even whole continents if the nations in it are not at war). Land rents are national wealth. So a tax on the annual rental value of land does not affect private wealth and can't possibly reduce national wealth, it is just a fair user charge.

And people who want to live off national wealth for nothing in return are referred to by his ilk as "scroungers". Why do households who get a couple of hundred quid a week in welfare count as scroungers but people who get hundreds of thousands of pounds a year in land rent count as "aristocracy"?

2) That only happens if people insist on over-occupying. If people want to pay less, they can trade down. It makes more sense for workers and businessmen to live near where they work, land rents are higher where there is more economic activity and they are the ones who can afford to pay the tax, why not let them live there?

3) The whole point of income tax (and private collection of national wealth) is to make workers and businessmen poorer and landowners, bankers, politicians and quangocrats richer. So he has completely missed the point as per usual and turned all logic upside down.

4) Income tax is far worse than that. Taxes on earnings, output and profits have huge deadweight costs. For every £1 collected, the economy shrinks by 50p (and then we need to collect yet more income tax to pay for the unemployed). A tax on land has no dead weight costs and actually stimulates economic activity, so for every £1 collected, the economy grows by a few pence. And of course having a user charge for consumption of national wealth does not reduce the amount of national wealth. Imagine: businesses were no longer allowed to charge their customers. Would total wealth increase or decrease?

And while a tax of £1 per year on each worker makes all workers £1.50 worse off in eternity, a £1 annual tax on a plot of land does make all owners of that land in future worse off. The price will be reduced to compensate future owners. We get over it and move on.

5) Typical Homey crap: "I bought my land out of taxed income". No you didn't. You paid off a mortgage out of the money you saved in rent, and the bulk of the value (all the increases in rental value or selling price since then) is an entirely unearned free gift bestowed on you by the equally Home-Owner-Ist government (and if you are old enough, they will have done you the favour of wiping out half your mortgage with inflation).

6) Yes, there is a big difference. Taxes on earned income stifle the economy and help to transfer wealth upwards so that it becomes ever more concentrated and work becomes less and less worthwhile compared to land speculation. Taxes on land rents stimulate the economy (however slightly) and constantly level the playing field between regions, between generations and between the vested interests and the vast majority.
Posted by Mark Wadsworth at 20:41 No comments:

Real Reform: British Land - The rent collection arm of the bank...: British Land are really being used as a cover for the enormous rental income from mortgage assets. For banks. And use this to create a local...
Posted by Robin Smith at 11:38 No comments:

Readers' Letters Of The Day

From The Evening Standard:
-------------------------------
Allowing London to retain Council Tax and Business Rates revenues* would be a huge leap forward, encouraging the GLA to focus investment on transport and housing and increase the tax base.

Can Boris Johnson now resurrect Herbert Morrison's 1939 Site Value Rating for London Bill? An annual levy on some of the most valuable land in the world should sort out the capital's spending constraints nicely.

How timely of the Nimby residents of South Bucks to provide an example of this by obstructing the creation of jobs at Pinewood Studios.

Posted by Mark Wadsworth at 15:56 No comments:

Even the Daily Mail has started saying it...

House prices in Britain are still too high. They are unaffordable on almost every measure ever used, except for those cooked up by using mortgage interest rates, which are currently at a record low and will one day rise. And then we'll really be in trouble.
The comments are surprisingly supportive. So far no Home-Owner-Ists have piped up saying how great it is when housing becomes even more unaffordable. Presumably they're over at the Express and the Telegraph.
Posted by Mark Wadsworth at 10:44 No comments:

Our first ever candidate Rohen Kapur campaigned his socks off and got 0.11% of the vote in the Corby & East Northants by-election last year. Our second ever candidate Robin Smith campaigned [even more than his socks] off and got 0.26% in the Croydon North by-election.
I didn't do much campaigning apart from a few posts here; having my leaflet delivered to every household; and sticking a big poster in my front window, and I got 0.44% in the Essex County Council elections yesterday, (or just over 0.4% if you exclude the votes cast by me and Mrs W).
Posted by Mark Wadsworth at 11:47 3 comments:

Your most 'umble and obedient servant...

From The Daily Express:
I BELIEVE you can judge a government's values by how it treats the groups most likely to vote for it.
The last Labour government spoke endlessly about looking to restore the link between the level of welfare payments for any particular age group and the likelihood of people in that age group voting, but when it came to it, foolsihly did nothing. Within weeks of walking into the DWP we introduced the "triple lock" to provide a proper mechanism by which we increase welfare payments to core voters.
We believe this was the right thing to do for people who have spent their lives doing the right thing – turning up to vote for whoever gives them the most generous handouts. Now there is a debate about whether regular voters should continue to receive benefits like the winter fuel payment, free bus passes and TV licences.
The vast majority of our core voters are relaxing at home without a care in the world apart from putting a cross on a bit of paper every year or two. For many, retirement is about careful budgeting and trying to persuade their families to help out. So their votes are relatively cheap to buy and I'm amazed that Labour weren't more keenly aware of this. Again, how government responds to this is a mark of their priorities - like being re-elected.
It is that desire to buy votes as cheaply as possible which was behind the Prime Minister's pledge to protect universal voter benefits for the lifetime of this parliament and that's what we're doing. I make no apology for it.
For some, the winter fuel payment is not a necessity. The free bus pass an unexpected and welcome extra. But for others these represent valuable lifelines. Ensuring the heating is turned up in winter so that they stay alive to vote for us again the next spring. Making it easier to get to the polling station. For people who would vote for us even without the winter fuel payment and want to return it, then they can do that.
But as I made clear on the Today programme this week, I am not asking nor demanding anyone to do this. The policy has not changed. Pensioners have contributed our hold on power throughout their working life and they deserve a kick back in retirement. This government can be proud of having done this simple electoral calculation, of what it has done and continues to do for our core supporters. This is a measure of what we think is important, not only as government, but as a group of self-serving insiders.
And if you behave nicely, who knows? Maybe one day you'll start receiving interest on your savings again.
Your most 'umble and obedient servant
IDS
Posted by Mark Wadsworth at 11:03 No comments:

It's quite nice being able to vote YPP

I thought the logo came up pretty well on the ballot paper and was easy to spot.

And it's also quite nice being able to vote for yourself :-)

No doubt tomorrow's result will be a bit depressing but you never know, sooner or later we'll move up from "last" to "also ran" to "fringe party" to "minor party" etc.
Posted by Mark Wadsworth at 21:30 No comments:

"Current grants to persons and non-profit making bodies" is mainly old age pensions and welfare payments plus a chunk for fake charities; "Pay" means public sector pay, 7 million people @ £25,000 each. And then they spend as much again on corporate welfare.

A special mention must go to the £28 billion "accounting adjustments": 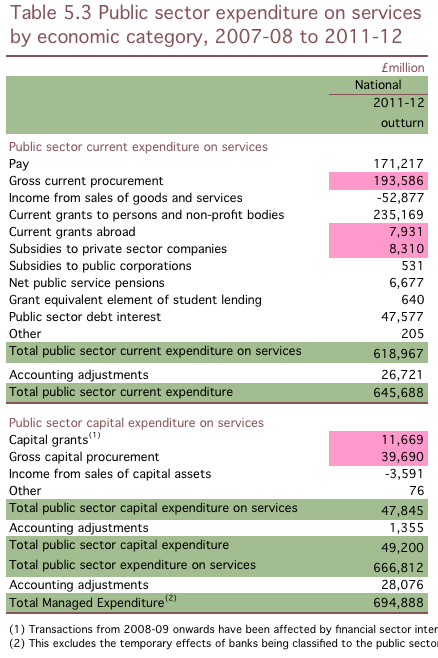 Posted by Mark Wadsworth at 08:39 No comments: