Old habits die hard; a crude example of rent seeking down under...

The City of London's contemporaries down under probably lack the sophistication of their old colonial masters. However this presentation, although heavy reading, is essential viewing for anybody who wants to understand the methods the financial sector use to fleece the unsuspecting public - grab a cuppa and enjoy... 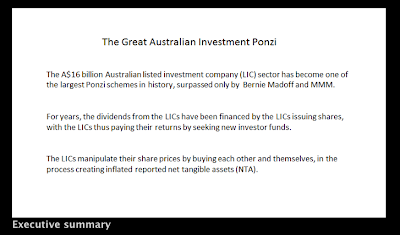 Email ThisBlogThis!Share to TwitterShare to FacebookShare to Pinterest
Labels: Ponzi

By Dreadnought On The Slipway, our only quibbles are that he doesn't go far enough:

There is a lot of rent seeking in the UK. This is only natural and very understandable in a society where the population is aging and retiring people seek to live off the accumulated assets of their lifetimes. One might say that it is a good and positive thing that large numbers of people have saved enough to have an income in retirement and indeed it might be good, if it were wholly true.

But the fact is that the large numbers of rentiers now retiring from paid work and
hoping to live off their rents have been the most fortunate recipients of inflationary benefits [and transfers of wealth via the tax system] who have ever lived. Their inflationary gains over the years have been simply an accident of demographic, social and financial history. From the point of view of effort expended they are completely undeserving of their fortunate position.

Looked at from the point of view of a thinking, forced renter, and there are many, the situation is completely unacceptable. These people, who are mostly of working age, rightly perceive a future where they will work to pay for the retirement of the current generation without any chance ever to enjoy their good fortune. They feel that they will never be able to buy houses because prices are too high, because deposits are too high and because the high rents they pay prevent them saving a deposit anyway.

If this situation is not remedied it will have incendiary social consequences. But what can be done?

To diffuse this worsening problem we need more homes and we need more jobs. This can only be done by shifting capital from unproductive sectors to productive ones. If rent seeking is to be made less attractive there is only one simple way to do this and that is to tax rents at a higher level than at present [an even better solution is to tax the rental value of all land, whether owner-occupied, tenanted or vacant/second home]. The resulting revenue should be put to work building homes for use by workers and building and renewing only infrastructure that makes the economy more competitive[and cutting taxes on work, profits and output].

There will be the usual howls from the self-interested that this tax will not produce revenue, that it will have unintended consequences, and that it will not benefit the people it is intended to. In any taxing decision there are risks. I think that if rents are taxed more some property owners will sell. This will increase housing supply for sale and reduce prices. If more houses are built this will provide
jobs, satisfy demand for houses and reduce rents and prices. If infrastructure is improved it means more jobs and the economy will be more competitive.

The capital locked up in property is simply being hoarded [actually there is no capital locked up in 'land', what happens is that income and profits are diverted from the productive economy to the unproductive sector, i.e. land owners]. We have to liberate it and use it for production and growth. It will be painful as the deadwood is culled out of the economy.
Posted by Mark Wadsworth at 14:26 No comments:

From The Evening Standard:

Who would want to be leaving school or university this summer? When I finished my education five years ago, the default setting among escapees was optimism.

Sure, we were sad to wave goodbye to friends, fancy dress festivities and — for some of us, at least — studying, but there was a wider world of work we wanted to be part of. Today, that feeling must have turned into despair.

According to research released this week, an average of 73 graduates will be chasing every job. But if the situation sounds dire for the highly educated, imagine how those without letters after their names feel as they fire their CVs off into the abyss. More than one in five 16- to 25-year-olds is currently out of work. They aren’t simply suffering alongside everyone else — the young are being hit disproportionately.

I’ve spent the past three years wondering what it will take for those in power to tackle the problems facing the under-25s adequately. For instead of helping them, this Government seems intent on kicking them.

The Education Maintenance Allowance was abolished. Tuition fees have trebled. And if the Tories stay in power, the young can look forward to having their housing benefits scrapped too. But nowhere does this attitude manifest itself more obviously than on youth unemployment, where the Government’s £1 billion Youth Contract is nowhere near enough.

Perhaps the Conservatives have largely given up on the young, deciding that it’s easier to convince the generations above that the fresh-faced are just shirkers, too hopeless to find work or to deserve homes or help. Certainly, the under-25s are easy to ignore — they don’t, after all, vote in the numbers that the elderly do.

But if there is a political explanation for half-hearted action, there certainly isn’t an economic one...
Posted by Mark Wadsworth at 15:05 No comments:

Thanks to Bob E and MBK for the various links.

The basic template for the Work Programme, also known as "back-to-work" or "work for dole", is as follows:

1. Two large political parties whose policies once in government are largely identical (it is merely the rhetoric which is different). This ensures continuity for all the people who are milking the taxpayer.

2. A "financial crisis" which is the inevitable outcome of a house price bubble, for which you need a good sold basis of Home-Owner-Ism.

3. This leads to more job insecurity and a climate of fear, which The Powers That Be use to...

4. Create a desperate desire among the populace that the government "do something" to sort all this out, they can get away with outrageous measures that would not be accepted in peacetime, such as massive bank bail outs, which is by and large outright theft, but they can easily sell this to the Home-Owner-Ists on the basis that the banks have to be bailed out and subsidised or else house prices will start falling...

5. To distract the electorate's attention from this massive 'bezzle, The Powers That Be have to play divide and conquer, which means pitting those who still have jobs against those who don't. The number of unemployed increases during a "financial crisis" so the cost of the welfare state also goes up, so it is not difficult to somehow convince people still in work that the recession is all the fault of people who have lost their jobs (or never had one). This is a bit like blaming the First World War on those who died in the trenches, but hey.

6. The Powers That Be can't all be bankers of course, so we have another group of people who realise that they can cash in on the anti-welfare claimant mood by setting up back-to-work schemes. The idea is that by spending a few hundred quid up front, they can somehow get people back into work, thus saving thousands of pounds a year in future. Which would be fine if there were any jobs available, but there aren't, but let's gloss over that.

7. They in turn need cheerleaders in the fakecharity sector, for example the Social Market Foundation who recommended something along the lines of the Work Programme back in 2009. That little report was of course funded by yet another taxpayer funded body called Remploy.

8. None of these back-to-work schemes actually work of course, the number of people on the schemes who find work is only about 3%, which is lower than the natural rate which would happen anyway of about 5%.

9. Even some of the politicians realise that this is all a complete waste of money and that it cannot possibly work, and the Public Accounts Committee mumbles about there a) not being enough jobs for the back-to-work people to fill and b) the whole thing being riddled with fraud.

10. At which stage the fakecharity cheerleaders suggest that maybe the back to work providers aren't successful because... the bar was set too high. All it needs for them to be successful is for the pass mark to be lowered, which is referred to as "grade inflation" when the same technique is used with GSCEs and A Levels.

11. So people on the dole are averse to going on the schemes. At which stage the lovely river of taxpayers' cash dries up a bit. No problem - all these private firms need is to be able to impose criminal penalties on claimants who refuse to go along with the charade.

12. At this stage, the back-to-work providers have achieved the same glorious positive feedback loop as the bankers: the bail outs (and the Quantitative Easing and so on) are supposed to help the economy recover, but this doesn't work of course, so a few months later, the banks come back and ask for another, bigger bail out. This doesn't work either, so a few months later, etc.

This is again similar to the tactics used in the First Word War - sending ten thousand men over the top to be slaughtered didn't work, so next time let's send twenty thousand.

No sane person would keep doubling up each time if something isn't working, unless of course he is the beneficiary of the doubling up rather than the person paying for it. Which applies to the back-to-work scheme, it doesn't work, but instead of just shutting them down, what they recommend is lowering the bar, increasing the payments to the scheme providers and allowing them to impose criminal penalties on those who refuse to play along.

13. While we're in the mood for harsh measures, the old give them vouchers instead of cash idea has reared its ugly head again.
Posted by Mark Wadsworth at 11:09 2 comments: