Back to the future

The weekly earnings of full-time workers in the UK fell, in real terms, each year between 2008 and 2013, official figures show.

The Office for National Statistics (ONS) says in cash terms earnings grew, by only 2% a year, from 2009 to 2013. But after taking inflation into account the purchasing power of those earnings suffered an overall fall of 8%.

This means that the real value of the UK's average weekly earnings are now back to the level of 2002.

The Department for Communities and Local Government (DCLG), which publishes the [English Housing Survey] each year, said:

It pointed out that private renting in England had been steady at about 10% of all households during the 1980s and 1990s, but had since grown sharply, nearly doubling in size.

The number of tenants in England and Wales forcibly evicted from their homes last year after court action reached a record high.

Some 37,739 private and public sector tenants had their homes repossessed by court bailiffs in 2013, according to figures from the Ministry of Justice. That is the highest number since records began in the year 2000.

However, the number of homes being repossessed by mortgage lenders at the end of 2013 was the lowest in a decade.

In cases that involved court action, 12,147 people had to hand back the keys to their home between October and December last year. The Ministry of Justice put that down to low interest rates and a "proactive approach from lenders in managing consumers in financial difficulty".
Posted by Mark Wadsworth at 18:24 1 comment:

Over at Kathy Newman's Channel 4 blog.

Making squatting a criminal offence was the start, it appears that the scales between protecting homeowners from the scourge of repossession on the one hand, and evicting tenants on the other, are being tilted in opposite directions.
Posted by Mark Wadsworth at 22:58 No comments:

We were delighted by Danny Dorling's endorsement of a land value tax.

The Holy Grail of high wages/low house prices can be achieved by collecting taxes from the rental value of land instead of from earnings and output. Our calculations show that replacing council tax, VAT and National Insurance with a fiscally neutral Land Value Tax would leave most young couples £10,000 a year better off.

As well as reversing the rising tide of wealth inequality, such a measure would dampen the boom-bust cycle and lead to more efficient use of existing buildings.

Land Value Tax was supported by figures as diverse as Marx, Churchill and Milton Friedman. Now that corporations can shift profits between jurisdictions at the touch of a button it has more relevance than ever as land cannot be hidden abroad.

I know it's Valentine's Day, hence and why I shall have to sneak of before 7 pm.
Posted by Mark Wadsworth at 20:41 No comments:

The land use trade-off is not between urban and agricultural, it's between farms and forests. 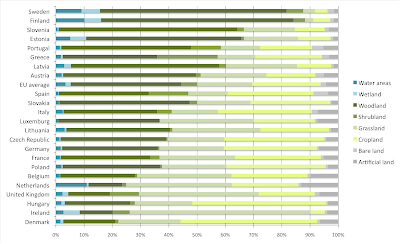 Posted by Mark Wadsworth at 18:40 No comments:

Email ThisBlogThis!Share to TwitterShare to FacebookShare to Pinterest
Labels: EU, land use 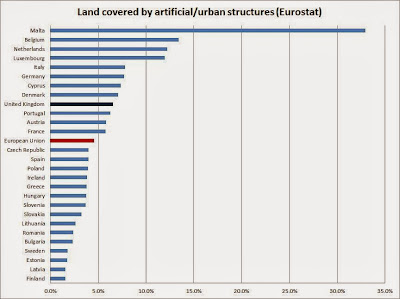 Posted by Mark Wadsworth at 20:15 No comments:

I'm shutting the Poll after a week, results as follows:

For a given size of an economy, which would you choose:

So now we know.

It's just a question of explaining that this is easily achieved by turning back the clock fifty years or so to the last time we had low stable house prices, and before the share of wages after tax and rent/mortgage payments started their long and slow decline.

It's not difficult - the UK government used to have a four-pronged attack:
- plenty of new construction, for private sale as well as relatively easily available council housing,
- rent controls and high taxes on private landlords,
- sensible regulation of building societies, strict lending multiples, and
- last but not least, instead of VAT on the productive economy there was Domestic Rates and Schedule A taxation on housing.

Posted by Mark Wadsworth at 20:52 No comments: