The core of our philosophy is referred to as "Georgism" (Wiki entry). Simply put, taxes should be collected from the value of land (and other monopolies) and not from earnings and output. As an add-on, the bulk of the welfare and state pension system (excluding severe disability benefits and housing related benefits) and most tax breaks and reliefs should be replaced with a flat rate Universal Basic Income for all children, adults and pensioners (different weekly amounts for different age groups).

This is often painted as a radical or extremist point of view, but actually it is very centrist/moderate. There are Land Value Taxers (and UBI supporters) in most political parties, but in all parties they are a minority and have been going backwards for the last century. YPP has gained members from - and lost members to - all the other political parties. We get shot from all sides, who all lump us in with their opponents!

The point is that this Georgism is the best - and possibly only - way to achieve three apparently conflicting goals. There is broad support for each of these (think Corbyn's Labour v Conservatives v Green Party) but those parties focus on one or two at the expense of the other(s): 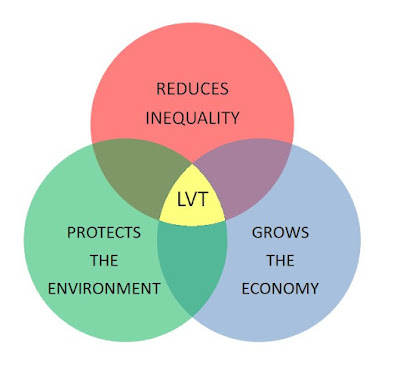 Reducing inequality by levelling up rather than levelling down

Land ownership is the biggest driver of inequality if you look at the most relevant way of measuring it i.e. net disposable income after tax and housing costs. Taxing land values instead of earnings or consumption will greatly reduce this state-sanctioned inequality. There is also a huge inequality between those lucky enough to have bought homes in the south east when they were still affordable compared to most of the rest of the country.

The next biggest driver of inequality is unemployment. Reducing taxes on earnings and output will stimulate the economy i.e. more jobs will be created, and replacing means-tested benefits with a flat rate universal payment will not discourage or penalise low earners (which is why UBI has supporters on left and right).

Simply reducing taxes on earnings and output (the most damaging/regressive taxes are VAT and National Insurance, or 'sales taxes' and 'payroll taxes' for non-UK readers) might achieve this, but if land is left untaxed, most of the gains will just accrue to landowners and the tax shortfall will increase inequality/endanger public services.

Mitigating the impact of economic growth on the environment

This is a complicated topic as it relies on secondary effects rather than crude direct intervention:

- LVT will encourage a more compact urban environment, heating and lighting flats or terraced houses uses less energy than sparser housing, and urban dwellers are more likely to be able to walk or use public transport to get to work/the shops/school.

- Direct 'Green' measures impose trade-offs. Renewable energy is (for the time being) more expensive than fossil fuels, which in turn impacts low-income households most and dampens economic activity. It has been observed that when people become wealthier, they start to care more about more intangible things - like the environment - because they can afford to do so.

- 'Land' in the wider sense includes use of natural resources, so taxes on fossil fuels, vehicle use and disposable goods are natural complements to LVT.

We could add at least two more circles/goals to the Venn diagram, which would also overlap in the middle:

Early Georgists and early Libertarians (not to be confused with today's Alt-Right who incorrectly label themselves Libertarians) had a lot in common and many were both.

Untaxed land ownership is like slave ownership; those who collect rent are little better than slave-owners and those who pay it are, in economic terms, little better than slaves. Most would agree that abolishing slavery is a good thing and increases overall personal freedom; few would argue that abolishing slavery took away people's right to enjoy slaves. Similarly, most would agree that giving women or non-landowners the right to vote was a big step forward; few would argue that it diluted the voting power of men or landowners. In each case, overall, personal freedom was increased.

Those who argue against LVT always say that it reduces the freedom of landowners (or owner-occupiers) to sit back and relax once they have paid off the mortgage; but they are still relying on public services funded by taxes deducted from (a burden placed on) other people's earnings and output. So LVT would reduce the perceived economic freedom of some (landlords and semi-retired households) it actually increases overall total personal freedom.

There are also more thoughtful Christian and Jewish people who support LVT (and/or UBI) for religious reasons - surely, if there is a God and s/he created the earth (and the natural resources and the radio spectrum), it was for the benefit of all mankind to be enjoyed equally (or at least, equally by followers of your particular religion); so those who use land or natural resources or radio spectrum should pay compensation to those excluded?