From The Daily Mail:

Councils will need to build thousands more bungalows to deal with a ‘critical’ problem in housing Britain’s elderly, ministers say.

Advice issued to planners this week will highlight the need to match the supply of local accommodation to the needs of an ageing population looking to live independently for longer.

Half of new households created in the coming years will be over-65s, while the 85-plus population will soar from 1.4million to 3.7million by the mid-2030s, many with chronic conditions or disabilities.

Because you just can't imagine the likes of the Mail running an article like this:

Councils will need to build thousands more flats and homes to deal with a ‘critical’ problem in housing Britain’s young workers and young families, ministers say.

Advice issued to planners this week will highlight the need to match the supply of local accommodation to the needs of the priced-out generation looking to live independently.

Half of new households created in the coming years will be under-25s, while the number of under-40s forced to rent undersized accommodation will soar to 10 million by the mid-2030s, many living in cramped or unhealthy housing owned by the over-65s.

without there being the usual endless wailing and gnashing of dentures about The Hallowed Green Belt and Pressure On Local Services.

H/t Khards at HPC.
Posted by Mark Wadsworth at 21:08 No comments:

From yesterday's Evening Standard:
Shadow housing minister Jack Dromey warned: "Unless the Government invests in building the homes our capital city badly needs,(1) rapidly rising property prices will put the dream of home ownership beyond the grasp of millions of Londoners."(2)
... Housing minister Mark Prisk said:
"Today's figures show our Funding for Lending Scheme, and record low interest rates, have led to the highest level of mortgage lending since 2008.(3) But alongside this, we're also pulling out all the stops to get Britain building,(4) and the increased availability of mortgage finance is boosting confidence in the housing market, and encouraging house builders.(5)
"We've also been working with the Mayor to invest billions of pounds to deliver the fastest rate of affordable housebuilding for two decades."(6)
1) Clearly, when Jack Dromey's party was in government, they did everything they possibly could to drive up house prices and rents - especially in and around London - because that's what gets you re-elected in this country. His government sold off as many council houses as Thatcher did and kept new construction down to under 200,000 a year (very little of which was replacement council houses).
2) What's with the "will"? For the past ten years or so it has been the case there are at least three million people who live and/or work in London who can't afford to buy there any more, that's why a quarter of London's population is now renting privately and there is a large group of London workers who live tens or hundreds of miles away because that is the only place they can afford to rent or buy.
Pots. kettles.
3) That bit's true, actually. What he doesn't mention is that his government is desperately blowing another credit bubble, stoking inflation and robbing savers and taxpayers alike.
4) Nope, The Tories are the true party of the NIMBYs, one of the few election pledges which they have fulfilled is to halve new construction from its old low level to its lowest level in a century, i.e. about 100,000 a year. So he got the word "stop" in the wrong place.
5) Encouraging them to do what? Push up their prices mainly and make handsome margins on the minimum of activity. From the BBC, yesterday:
House-builder Persimmon has announced a big jump in profits, amid "improving customer demand" for its properties. Underlying pre-tax profits were up 40% to £135m in the first six months of 2013, from £97m in same period in 2012.
The company said that it spent £236m acquiring new land, up from £142m in 2012, bringing the total number of plots it owns to 70,716.... It currently has 390 active construction sites across the UK.
6) That's the usual vague promise about what might happen in the future and is not even quantified. Will the money be spent on new construction (good) or wasted on land (bad)? How many homes? Under Labour, virtually no "affordable homes" were built, so improving on that is hardly an achievement.
And IIRC, the Tories were quite happy to sell off thousands of new flats in the Olympic park at a huge loss to some chap who just happened to have donated £50,000 to the party.
Posted by Mark Wadsworth at 12:09 No comments:

"Why do we tolerate daylight robbery in housing?"

I sometimes think the root of our failure is our political language. Rename housing benefit “landlord subsidy”, Help to Buy “Help to Rig”, and Funding for Lending “Funding for Stealing” and we might tolerate them less.

Research commissioned by aides to Ed Miliband show that, in the past two decades, attitudes to home-ownership have fundamentally altered...

Those aides ought to know that it was Proudhon, not Marx, who said that property is theft; and as Standard readers — who pay the price every day for this folly — well know, housing policy in Britain is now tantamount to daylight robbery.
Posted by Mark Wadsworth at 20:52 No comments:

Not so subliminal messages 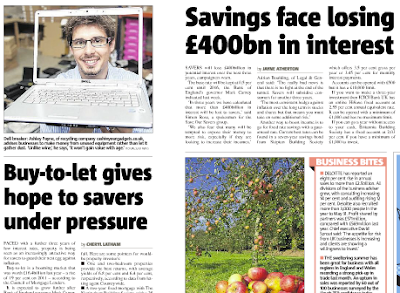 Posted by Mark Wadsworth at 08:13 No comments:

From the Evening Standard:

It is also clear that such contracts can come with problems.

The Chartered Institute of Personnel and Development suggested yesterday that about a third of employees on these contracts would like more hours. Some 14 per cent felt the hours they were offered were often insufficient for them to achieve a basic standard of living. With the cost of living rising, this is a real concern that government should be looking to tackle.

I don't get these zero-hours contracts.

[The tax and welfare systems interact to generate a huge amount of unemployment, and not just obvious effect that taxes on output and employment reduce output employment, the absence of taxes on the rental value of land do it just as much.

Then add on all the employment regulations like holiday pay and redundancy and maternity rights, and you can understand why the less ethical employer who does not require a highly skilled workforce prefers to use occasional or agency workers who are never there long enough to accrue holiday pay etc.

This sort of paternalist stuff is best provided through the welfare system, i.e. a citizen's income - if maternity pay/rights is funded by all businesses equally, regardless of whether they employ younger women or not, then there is no disincentive to employing younger women etc. But let's put that to one side].

So I'm running a shop, let's call it Sports Direct, for sake of argument, it's open seven days a week, ten hours a day and I know that I need ten people in the shop at any one time (less during the week, more at weekends, go with me on this). That's 700 working hours for which I need people and for which I have to pay people.

I could employ 20 people working 35 hours a week each, or 35 people at 20 hours a week each, or some combination. And yes, some people will call in sick or won't be able to make their shift, so I'll have to ask people whether they can do a few extra hours, or I'll have to ring round and see if somebody is willing to come in on their day off etc. And then there are holiday rotas, leavers and joiners, it's all management faff for which I am being paid.

Not to mention that it is then a f-ing nightmare for people on benefits and Working Tax Credits having to re-submit their claims every month depending on how many hours they were paid for.

Why is it better for me, as the manager of that shop, to have fifty people on zero-hours contracts whom I ring up at random when they are least expecting it and when it might be inconvenient? Why is it not better to have a smaller workforce with their own pre-agreed shifts - the mums work short hours during school time; the students work at the weekend and during school holidays; the regulars are there full-time; some people are happy to work evenings for a bit of extra pay and so on?

The final insult is that then the government is slagging off all those fifty people for not working longer hours ("lazy, feckless" etc) instead of thinking more seriously about the tax and welfare systems generally. Or indeed slagging me off for not giving each of my fifty zero-hours people a full-time job (which I clearly cannot possibly do, or else I'd be paying thirty people just to stand around).
Posted by Mark Wadsworth at 22:15 No comments:

Email ThisBlogThis!Share to TwitterShare to FacebookShare to Pinterest
Labels: Unemployment

So what's the point of all this, George?

Families receiving child benefit were offered some relief today when George Osborne announced that the cut-off point will be £60,000. The Government had been previously wanted to scrap child benefit for anyone earning more than the £42,475 but the plans were met with criticism.

An increase in the threshold to £60,000 will lift significant numbers out of the child-benefit trap, but the anomaly of hitting one-earner families harder will remain as it is simply shifted higher up the income scale. Child benefit is currently worth £20.30 a week for the first child and £13.40 each for any more, regardless of the parents’ income.

The Institute for Fiscal Studies estimated that the move would have affected one in six parents – or a total of 1.2m families – and save the Government £1bn a year.

Families with incomes of up to £300,000 are to benefit from new tax breaks to help cut the cost of childcare.

Chancellor George Osborne visited a nursery today as he unveiled plans to cut bills by £1,200 per child. But he faced sharp criticism for using taxpayers’ money to help some of the wealthiest families in the country while snubbing stay-at-home mothers who will not benefit...

Critics said the policy was not 'sensible' and and 'inconsistent' with other polices to cut help for families where someone earns more than £50,000.

From 2015 families where both parents work will get help from a £1billion fund.
Posted by Mark Wadsworth at 22:00 No comments:

i.e. this evening (2 August) from about 5.20 pm onwards at The Brewmaster pub near Leicester Square Tube station.

Posted by Mark Wadsworth at 08:18 No comments: