From The Evening Standard: 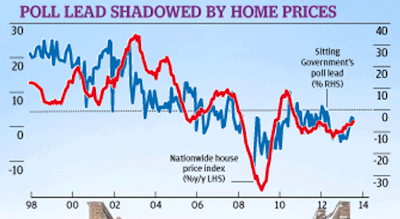 This is (partly) why the UK government, of whichever party, is so keen to pump up house price inflation - because it gets them re-elected.

The main reason is that most MPs own multiple homes and/or are buy-to-let landlords, and higher house prices are good for banks, who have got enough politicians in their pockets to be able to effectively run the country.

Just sayin'.
Posted by Mark Wadsworth at 20:27 No comments:

From The Metro:
With regards to people born in the 1980s not being able to afford housing, with rent predicted to go up by 46 per cent by 2020 (Metro, Mon), what wage increase will there be for the young adults of tomorrow? I expect there to be very little or even a reduction in salaries.
Thankfully, according to housing minister Mark Prisk, the government is going to [subsidise] housing specifically for private rentals, so the rich can get richer while making the poor poorer.
Hurrah.
Ross Allen, Manchester
Posted by Mark Wadsworth at 10:25 No comments:

How do they expect to get away with this?

From The Metro, via Malaysia Chronicle:
Research by the National Housing Federation (NHF) estimates that the average first-time buyer's home will cost £245,165 in 2020. The current national average price for all homes is £239,000. The study goes on to warn that the shortage of affordable housing will mean 3.7million young people will be living with their parents by 2020, an increase of 700,000...
OK, so what's the government's response..?
... housing minister Mark Prisk said: "This report does not take proper account of the range of measures we've put in place to create a bigger and better private rented sector. That includes the £1billion Build to Rent fund and £10billion in loan guarantees to build new homes specifically for private rent. We're investing billions of pounds in an affordable homes programme that will lead to the fastest rate of house-building for two decades."
To paraphrase that: "We're going to take some of the tax paid by non-land owners and give it to land owners so that they can build housing to rent back to the people who paid the tax in the first place."
Er, how about taxing the land owners instead and giving the money to non-land owners?
Posted by Mark Wadsworth at 11:22 No comments:

"When we pay rent to our MPs, we have a problem"

... there's a glaring omission from any discussion of a property market so distorted and unequal that a report published this week showed a third of the country is effectively off limits to families on an income of less than £22,000. (Not off limits in the sense of buying, you understand; that's been the case for years. Off limits even for renting.) And of the fact that this same property market – in terms of its legislative oversight, financial regulation and taxable structure – is overseen by a parliament in which a third of MPs are buy-to-let landlords.
Posted by Mark Wadsworth at 07:53 No comments:

Email ThisBlogThis!Share to TwitterShare to FacebookShare to Pinterest
Labels: politics

The Torygraph trots out the usual Home-Owner-Ist propaganda:

The Office for Budget Responsibility said that spending on the state pension, social care and healthcare will rise from 14 per cent of Britain's GDP to almost a fifth.

The report found that allowing more than 140,000 immigrants into Britain a year, equivalent to 6million people, would help increase the overall number of people who are in work and improve public finances.

David Cameron has pledged to reduce the levels of immigration into Britain to "tens of thousands" during this Parliament. Last year the number of immigrants dropped by 89,000 to 153,000.

The Homeys *love* immigration of course - it keeps wages down, it pushes rents and house prices up, it gives them some easy targets to blame everything on.

This sort of propaganda enables the kleptocrats to direct attention away from the fact that the reason for the massive deficits is simply fraud and theft on their part, they can justify tax rises on the basis that they need more money for old people and old people are all too ready to lap this up.

It's the old divide and conquer: pit old against young, pit existing citizens against newcomers etc.

If we cut out the kleptocracy, had proper qualitative controls on immigrants (i.e. can speak English, are not criminals, are not disease carriers, do not belong to a religious sect that wants to destroy everything we hold dear etc), if we had taxes on the rental value of land instead of on earned income and hence more employment and a constantly growing economy, and if we had less NIMBYism then immigration would make everybody better off, and we'd be able to pay for all this old-age stuff out of petty cash.
Posted by Mark Wadsworth at 22:00 No comments:

One for your diary

Posted by Mark Wadsworth at 07:43 No comments: