The Citizen's Income Trust booklet has finally been updated.

The 2012-13 version with explanations is available here.

Well worth a read.
Posted by Mark Wadsworth at 19:20 No comments:

From this morning's City AM:

...a closely watched barometer of so-called unfairness between the generations shows prospects for young people have worsened in the past year as older peoples’ living standards have improved.

“The housing boom for the older generation in London and south east is a housing crisis for the under-30s,” Angus Hanton, co-founder of Intergenerational Foundation (IF), told City A.M. “This is moving towards a feudal society.”

The first link doesn't work any more, of course, as is so often the way with City AM articles which threaten to rock the boat, but thanks to the miracle that is Google Cache, it's still available here.
Posted by Mark Wadsworth at 21:14 1 comment:

From page 2 of the Bank of England's Systemic Risk Survey 2013 H1
There are three new entrants to the top seven risks: the risk of property price falls (cited by 25% of respondents, up
11 percentage points), operational risk (up 10 percentage points to 24%), where 'cyber' security was most frequently
mentioned, and risks surrounding the low interest rate environment (the fastest growing risk, up 16 percentage points to 24%).
Participants' perceptions of an increased risk of property price falls (in particular residential property price falls) could be
consistent with views of prices becoming overinflated or about to become overinflated. Responses in the low interest rate
category focused on the risk that artificially low interest rates are creating distortions in asset allocation, potentially leading to
overinflated risky asset prices.
The complete and utter po-faced state of denial here is staggering.
It is the self same Bank of England which is pushing down interest rates with the sole aim of driving up asset prices (as distinct from their values), which for the man in the street means land prices i.e. a house price bubble.
Some older savers are rightfully unhappy with miserably low interest rates and annuity rates, but happily, the Bank of England has blinded or bribed a larger majority with the Fool's Gold of a house price bubble. And if ever their lovely bubble looks in danger of popping, well, there's only one thing for it isn't there? Reduce interest rates even further in the vague hope that they can fob off the priced out generation by telling them at least interest rates are low and there's always the Help To Sell scheme to help them onto the ladder etc.
Under Wadsworth's Square Law of Nequity, it is overall far, far cheaper to allow house prices to fall and to write down individual loans to the new lower value of the homes on which they are secured (so that nobody is stuck in nequity for years) than it is to try and keep a house price bubble inflated. The former is a knowable and affordable sum of money and this solves the problem. The latter is a huge and unknowable sum of money that merely results in larger costs in future.
But for some reason, they can't and won't contemplate that.
Posted by Mark Wadsworth at 11:42 No comments:

Basically, they don't want to allow any more houses to be built (which would ease the debt burden on the next generation) on the off-chance that a couple of them would be bought by immigrants: 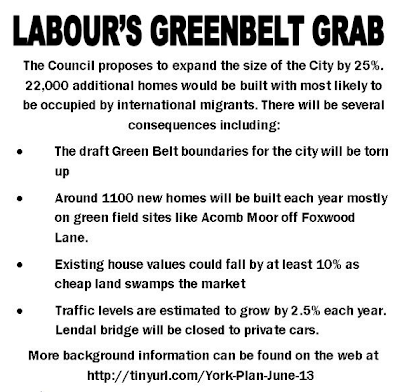 Posted by Mark Wadsworth at 11:40 No comments:

Yes, that's all perfectly true, but why wasn't The Guardian saying this while Labour were in government?

From The Guardian:
But lobbying doesn't begin to cover the extent of corporate influence. More than ever the Tory party is in thrall to the City*, with over half its income from bankers and hedge fund and private equity financiers. Peers who have made six-figure donations have been rewarded with government jobs.
But the real corruption that has eaten into the heart of British public life is the tightening corporate grip on government and public institutions – not just by lobbyists, but by the politicians, civil servants, bankers and corporate advisers who increasingly swap jobs, favours and insider information, and inevitably come to see their interests as mutual and interchangeable.
The doors are no longer just revolving but spinning, and the people charged with protecting the public interest are bought and sold with barely a fig leaf of regulation.
* Ahem, does the name Tony Blair ring any bells?
Posted by Mark Wadsworth at 10:41 No comments:

Thousands of pensioners and high-net-worth investors are at risk of losing a vital income stream under a rescue being prepared for the stricken Co-operative Bank.

The supermarkets-to-funerals mutual is preparing an emergency rescue plan for its financial subsidiary that is expected to include losses for holders of the bank’s junior debt, including £310m of permanent interest bearing shares (PIBS) issued by Britannia Building Society before it was taken over by the Co-op, and £60m of preference shares.

Of the £370m of bonds, which pay annual interest of between 5.55pc and 13pc, some £30m is held by members of the public. Any rescue would almost certainly see the coupon cut or cancelled, costing retail investors about £3m a year.

When you 'invested' in something as obscure as PIBS, it must have been obvious that the high returns were not guaranteed and largely a reflection of the higher risk attached to them, i.e. the risk that you wouldn't get your money back. I don't see why certain people should be insulated against this basic rule. The Co-op Bank appears to have screwed up and somebody somewhere has to pay the price (bear the risk), in a free market system the people who agreed - in exchange for a nominally high yield - to take the risk should pay it, end of, regardless of their age.

And how much are we talking about anyway? £3 million a year?

And how much is the government and the banking system trying to screw out of the next generation of purchasers via the Help To Sell scheme?

Whatever the maths of this is, the overall transfer from first-time buyers and future taxpayers (which is by and large the same group of people) to bankers and current landowners will be approximately double the promised total guarantee volume of £130 billion plus twenty-five years' interest thereon = £260 billion.

Divide that by ten million people under 40 who don't yet own a home and the total cost to each and every one of us over our working lives is something £26,000 each.

Thanks a lot, Georgon Osbrown!
Posted by Mark Wadsworth at 13:32 No comments: