Just how bad can it get for young people? (1)

If you think it's hard to get a foot on the career ladder here in Blighty, spare a thought for your Spanish and Greek cousins.  Under 25's in the EU's most under-performing economies now face over 50% unemployment. Have a look at this graph, that "ZeroHedge" have dubbed "Europe's scariest chart": 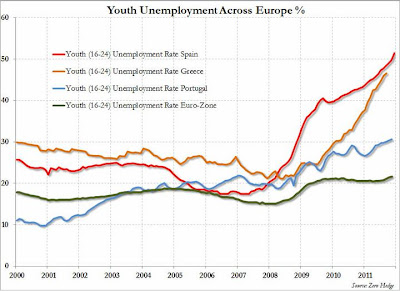 As boom turned into bust, Spanish youth unemployment violently decoupled from the Eurozone average and climbed relentlessly.  So what are they doing about it?  Perhaps more importantly, what is causing it?  Whatever answers Spanish and EU officialdom are giving, young Spanish people don't seem to agree, and are out protesting in droves.  Occupy Madrid (do a 'google images' search) made London and New York look like a gathering of the Rupert Murdoch fan club. 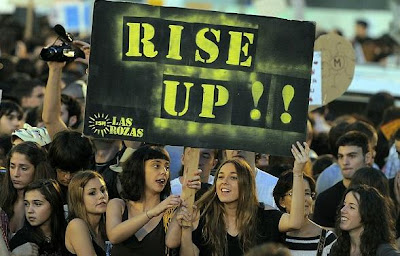 More and more young people in Spain are saying 'no' to the middle aged baby boomers who got them into this mess.  Here at the Young People's Party, we'd like to offer them our support.  Whilst inevitably, young people will disagree on how we got here and how we get out of this pickle, the important thing to remember is this.  The UK is governed by the same middle aged baby boomers that got things so wrong in Spain that 50% of their youth have no jobs and no future to look forward to.  These are the same people who allowed youth unemployment to rise from an already painful  20% to a third world like figure of over 50%.

What did they get so wrong?  Have they even admitted they got it wrong?  And most of all, how bad will they let things get for young people before they realise they are wrong?  This will be a long running theme here.  How many young peoples' futures will needlessly be sacrificed on the baby boomers' alters of pride, greed and stupidity.  What will it take before they admit they were wrong, are still wrong and are headed in entirely the wrong direction?
Posted by Steven_L at 17:42