In their May 2012 house price report, they include a couple of interesting charts. 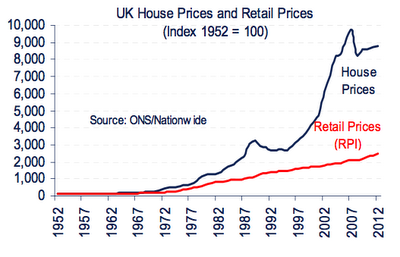 It would be more meaningful to compare house prices with earnings (which themselves rise a couple of per cent a year faster than the RPI) but the general observation stands that as the economy advances, house prices grow super-proportionately, i.e. they increase as a share of the economy, i.e. compared to normal shop prices (which gradually fall relative to wages), houses are three-and-a-half times as expensive as sixty years ago.

For sure, some of this extra increase has to do with the credit bubble and supply restrictions, but only some of it.

ii) The chart at the bottom of page 2 shows housing affordability in the ten English regions: 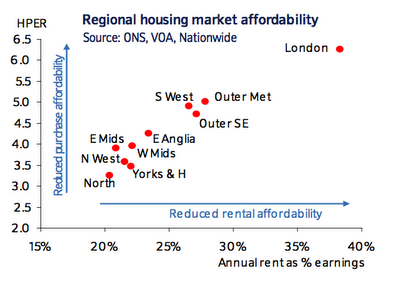 We observe that there is a more or less straight line between the dots - in the North, rents are 20% of earnings and houses cost three times earnings; and in London, rents are nearly 40% of earnings and houses cost over six times earnings, with all the other regions in a straight line in between. The explanation for this, which appears to elude Nationwide, is exactly the same as in i).

You just have to remember that a) average earnings are very low in the North and very high in London (with the other regions in a straight line in between), which draws people towards regions with higher earnings; b) these earnings differentials cannot be competed away (in the short or medium term); and c) actual day to day living costs are much the same anywhere.

As a result, that surplus which higher earners in higher earning regions have available - after paying for living costs - is not competed away by new arrivals (there is only so much space, and in any event, higher population density would push up average earnings yet further) and is simply soaked up in higher rents and house prices.

Email ThisBlogThis!Share to TwitterShare to FacebookShare to Pinterest
Labels: Rents