1. It has often been pointed out that voter turnout at General Elections has fallen since 1945: 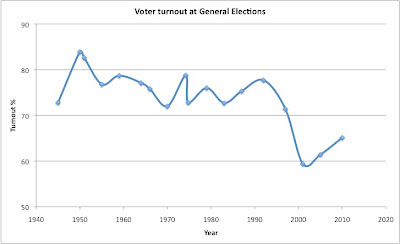 3. Turnout is even lower at local elections, at around 40% according to the Electoral Commission. Assuming that each winning candidate won half the votes cast, that means that winning candidates only won 20% of all potential votes.

4. The threshold for winning an MEP seat in European Parliament elections is even lower as MEPs are elected on the basis of multi-member constituencies. The South East region returns most MEPs (ten) and Labour won one seat with 8.2% of the votes cast. Wales has four MEP seats, and UKIP won the last seat with 12.8% of the votes cast. Turnout nationally was very low (35%) so that means Labour won an MEP seat in the South East region with only about 3% of the total potential votes. Source BBC. 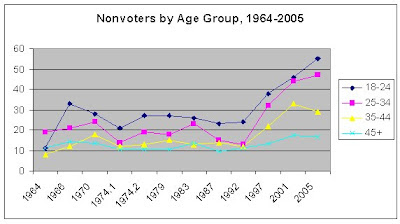 6. The UK population pyramid (from here) there are 19.4 million people aged 18 to 40, of whom about half (9.7 million) didn't vote in the 2010 General Election, in other words, there were nearly as many 18 to 40 year old non-voters as there were Conservative voters .
Posted by Mark Wadsworth at 18:54