Good work by the Pensioners' Party

Exhibit One, from The Guardian:

The pain that quantitative easing has caused pensioners and savers should be offset by government compensation, a report by MPs has said. The Treasury select committee recommends that the Bank of England provide an estimate of "the overall benefit and loss" to those groups as a result of the money-printing operation

"Loose monetary policy, achieved through quantitative easing and low interest rates, has redistributional effects, particularly penalising savers, those with 'draw-down pensions', and those retiring now," it said in its report on the budget. "The Bank of England has argued that some of those effects may be mitigated by the increase in asset prices stimulated by quantitative easing. While the aggregate of savers and pensioners may have received some benefit from higher asset prices, there will be many individuals who will not have benefited."

Ultimately of course, the purpose of QE was propping up and bailing out banks. To achieve that, the government had to push down interest rates. All QE boils down to is the government replacing long-term borrowing at higher interest rates with short-term borrowing at lower interest rates; so superficially the taxpayer makes a saving, but the commercial banks were allowed to bank a large part of these savings up front. This has the added bonus, from the banks' point of view, that low interest rates push up house prices, and if house prices are high, banks can trick people into borrowing ever larger amounts of money.

Presented like this, it doesn't sound too attractive, but the banks have harnessed the forces of Home-Owner-Ism. High house prices make us all poorer in the long run (and the banks correspondingly richer), but a large part of the electorate love the idea of high house prices because it makes them feel richer. Who are these people? 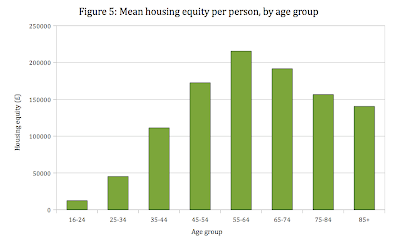 Chart from the Intergenerational Foundation

Yup, it's the the Baby Boomers born since 1945. The people actually old enough to have fought in World War II don't own that much housing (bearing in mind they have next to no mortgage debt and the figures above show net housing equity after deducting mortgage debt); the Boomers couldn't give a shit about their children taking on crippling mortgages and aren't too fussed about how little their parents have to live on either - they are rubbing their hands in glee at all their lovely inheritance.

Walter Harper has lived in his beloved home for two decades — but last July he was forced to put it on the market.
He shared the Luton bungalow with his wife and, after she passed away, his partner, and has watched his grandchildren play there. But he is being forced to move because he owes £110,000 on an interest-only mortgage that he can’t afford to repay. Instead of spending his last days in the house he loves, he will be forced to rent elsewhere.

Mr Harper, 69, first put his house on the market for £230,000. He has dropped the asking price by £20,000 and even if he gets this, he will still lose half of the money paying off the bank. These are savings he desperately needs, as rent is going to cost him almost £9,000 a year.

If he bought two decades ago, at the age of 49, the house can't have cost him much more than £50,000. The article says he had an interest-only mortgage, but why has it crept up to £110,000? A bit of mortgage equity withdrawal, perchance? And yes, his pension lump sum only turned out to be half what he'd been promised, but it still paid out £34,000, meaning he would left with a very modest £16,000 outstanding on his mortgage, which is still a fantastic deal, seeing as the mortgage he was paying was probably a lot cheaper than renting and he's made a £150,000 windfall, tax-free gain on the house.

But for some reason, The Daily Mail see this as a hard luck story (although he doesn't get much sympathy in the comments), while having no sympathy with somebody who's starting out today who's expected to magic a £40,000 deposit out of nowhere and then pay off a £160,000 which will cost twice that by the time it's paid off.

Again, mortgage equity withdrawal is the banks' secret weapon - a lot of the Boomers will be disappointed to find that their parents have already spent it all on themselves. Remember: in the end, the bank always wins (until I'm in charge).
Posted by Contact YPP at 22:04