Rent controls: A second best solution… but not the worst

What the Labour Party proposed this week was smoke and mirrors and is not rent control in the sense of an absolute cap; all they have tentatively suggested is that there be a cap on annual increases in rents (from a high starting point).

First of all, what we are really arguing about here is the question of who should get the site premium. What this means is that the rental value of physically identical buildings around the country are vastly different, depending on where they are. So you can rent a bog standard three bed semi-detached in the cheapest areas for about £5,000 a year; in parts of London/south east you would have to pay £30,000 a year or more. 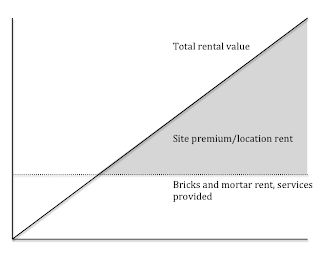 Under the economic-political system introduced, almost inadvertently, by Thatcher and taken to extremes by Blair/Brown and subsequently Cameron/Osborne, that value is collected privately by landlords, banks and owner-occupiers, but it was not always thus, as we will see.

a) The right wingers play the "disappearing homes" card and say, probably correctly, that the quality and quantity of rented accommodation on offer, especially in high rent areas will decrease, but as per usual they fail to mention what will happen to current tenants and the formerly tenanted homes.

b) There is little need to speculate: all we need to do is to remember that for most of the 20th century (from 1918 at the latest to 1988 at the latest), the UK had fairly strict rent controls. So in areas with high market rental values, landlords had little incentive to keep their homes in good condition. For example, if the true market rental value is £15,000 but rents are capped at £5,000, landlords can get away with renting a homes in very grotty condition for £5,000. Instead of the tenant paying £10,000 site premium and £5,000 for maintenance of the bricks and mortar, furnishings, he pays £4,000 for the site premium and only £1,000 for the actual premises. (Which is why the horror stories about really grotty accommodation are to do with London or New York.)

c) What the right wingers don't mention is that the UK's rent controls are a large part of the explanation for the rapid growth of owner-occupation in the UK until the late 1980s (there was a further small cosmetic boost following the council house sell-offs, which has since reversed itself). A landlord will only buy a house for the capitalised value of future rents, so houses in areas where you can only get £5,000 rent for them sell for (say) £100,000, and houses which you can get £25,000 rent for sell for £500,000 (ignoring the recent bubble in some areas).

d) If the rent for all three-bed semi-detached houses were capped at £5,000, regardless of where they are in the country, no landlord would be willing to offer more than £100,000 for one. A potential owner-occupier is not so constrained, he enjoyment/use value of the house is unaffected by the rent cap, so he is prepared to pay a higher amount but is only competing against other potential owner-occupiers, thus removing a lot of the upward price pressure. So the site premium is still being privately collected, but it is spread out among a much larger group of people (pretty much everybody).

e) So what would happen to a house currently being rented for £15,000 a year (selling price approx. £300,000, or probably £400,000 in London)? The landlord can continue to rent it out for £5,000, in which case the tenant gets most of the site premium 'for free', although he will end up paying for more repairs himself. Even though the home is now in good condition again, there is little incentive for the landlord to turf him out and benefit from those repairs, because he can't charge the next tenant more than £5,000 a year either. But an owner-ocupier would benefit from improvements, because he can still sell for full value to another potential owner-occupier.

f) Or the landlord, now deprived of the hope of making massive capital gains in future, can cave in and sell the home; as long as he can sell it for at least £100,000, he is better off investing the proceeds elsewhere. If all three or four million homes currently being privately rented for more than £5,000 a year came on the market, prices would clearly fall to a level which the three or four million former tenants can afford and owner-occupation levels would rise, which is always seen as A Good Thing. So it is nigh impossible to achieve Objective 1 (allow site premium to accrue to private tenants); it will mainly accrue to those tenants who become owner-occupiers, Objective 2, but that is not A Bad Thing.

g) Something else the UK had for most of the 20th century was strict mortgage lending rules. If there is a strictly enforced cap of (say) three times the main earner's earnings and a minimum deposit of 25%, then prices would fall to four times local average earnings. So the £300,000 or £400,000 home currently being rented to a household on a good wage of £40,000 or £50,000 (from e) would end up being sold to the sitting tenant for about £200,000. By reintroducing this (a Mortgage Market Review on steroids), we could significantly reduce the amount of the site premium collected by banks as mortgage interest; if the restriction cuts in to the profit the selling owner-occupier can make, then it benefits the next owner-occupier (a former tenant, as like as not) in equal and opposite measure; the site premium continues to benefit owner-occupiers as a class.

h) Another thing to note is that rent caps and mortgage lending restrictions did not discourage new construction to any great extent; as long as builders can sell a new home for more than it costs to build, they will do so. The current opposition to new construction is based on the probably unfounded belief that new construction in an area reduces the overall amenity of existing homes and thus depresses prices; that is the root of most NIMBY opposition. But with rent controls and lending restrictions in place, a home will not longer be something from which people hope to derive speculative gains.

i) Although difficult to quantify, there has also been a cultural shift in the UK over the past ten or fifteen years. Until the 1990s, private landlords were seen as a bit sleazy, as people who preyed on the weakest members of society; in social terms, they were only a rung or two above doorstep lenders or brothel keepers; people who didn't have a 'proper job'. Nobody boasted about his rental 'empire'. Nowadays, buy-to-let landlords are seen as astute investors who can hold their heads up high at the golf club, and if they collect enough rent to be able to pack in working, they earn a grudging respect.

Similarly, renting was just something you did for a few years after you'd left home, while you were studying, when you moved town to get a better job, down to London for a few years of 'high life', sharing a house with mates for a year or two until you earned enough to buy your own place. You can put up with grotty in your late teens or early twenties; the joke started to wear a bit thin after that, but so what? Most people in their mid-twenties could afford to buy.

j) The other good thing about rent controls is that it would halve the amount of Housing Benefit being paid to private landlords, currently about £10 billion a year.
----------------------------------
k) So why would YPP prefer to leave market rents as they are and collect the site premium in tax (call it Land Value Tax or Domestic Rates)? Why does this lead to even better outcomes?

1. Because of the way incomes and land ownership is distributed, every £1 in LVT which a working household has to pay would save about £2 in taxes on their earnings. This does not just make the vast majority of people better off, it would also be really good for the productive economy.
2. LVT pushes down the price of housing, and hence the size of mortgages, which end up costing as much again in interest payments, so every £1 LVT a first time buyer household pays saves that household £2 in mortgage repayments.
3. LVT leads to a better allocation of housing. With rent controls, there is no incentive for older, smaller households to downsize.
4. LVT encourages people, landlords and owner-occupiers alike, to keep their homes in the best possible condition; there is no tax disincentive to doing so. Once a landlord has paid the LVT, he gets to keep every penny of the extra rental value for himself.
5. Lower house prices and smaller mortgages would significantly dampen the credit/house price fuelled boom-bust cycle, thus minimising the impact of financial recessions.
6. LVT is completely neutral between landlord/tenant homes and owner-occupied homes. It is only if there is a completely level playing field that we will reach the optimum mix between rented and owner-occupied housing.
---------------------------------
l) Is it possible to have both: rent controls and LVT? Sort of...

1. If all housing were owner-occupied, then yes, we could have a national cap. The purchase price would be just the bricks and mortar value; owner-occupiers would then pay the site premium as tax (instead of paying tax on their earnings and spending). But this would pretty much wipe out the availability of rented housing in all but the cheapest areas (the capped rent minus the LVT would mean negative profits for landlords). We do not believe that this is a desirable outcome; the only accommodation available to rent would be spare rooms in privately owned houses (i.e. of those who want to stay put but can't otherwise cover the LVT), it would be nigh impossible to impose rent controls on such private agreements.

2. If lack of affordable rented accommodation is an issue, then there's always council housing as a fall back. We can still have some free market elements to this; low-cost short term halls of residence for students; low-cost long term council housing; mid-price Housing Association housing; and upmarket Crown Estates housing, for example. The fact that waiting lists for low-cost Council Housing are so long (years or decades in expensive areas) could mean one of two things: the rents are 'too low' or 'there isn't enough of it'. As ever, the solution lies somewhere between nudging up rents in prime areas and increasing supply. Any excess of rents collected over bricks and mortar cost all goes into the common fund and is a saving for 'the taxpayer'.

3. Again, assuming most or all housing is owner-occupied, we could achieve a half way house by the back door if private banks were forbidden from offering purchase mortgages; all purchase mortgages would be via a state-run bank; instead of formally collecting LVT, it would collect a large chunk of the site premium as mortgage interest; the longer the repayment period, the more it would collect. 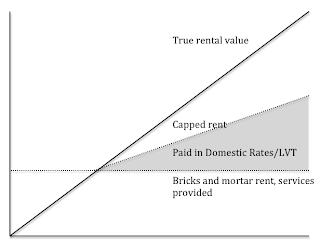 5. Following this logic, by setting the rent cap at a different fraction of bricks and mortar rent+site premium and the LVT at anything less than the remaining site premium, we could achieve a fan shape, whereby the residual balance continues to be collected by landlords, banks or current owner-occupiers. It is a question of fact and degree.
Posted by Mark Wadsworth at 14:34

Email ThisBlogThis!Share to TwitterShare to FacebookShare to Pinterest
Labels: Rents