The mainstream media are howling about the Bank of England's recent claims that it's 375 billion quid 'quantitative easing' policy has mainly benefitted the wealthiest 5% of the population.  The punters are lapping it up too, check out the comments over at the Guardian for instance.  The basis for this claim is that the richest 5% of Brits own 40% of all the shares and corporate bonds, and that QE made the price of these assets rise, but did it? 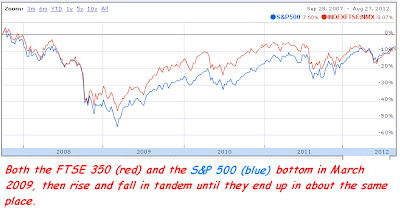 The above chart shows the UK's top 350 shares (the FTSE350) tracked against the USA's top 500 shares (the S&P 500) from late 2007 to today.  As you can see, both indexes bottomed out in March 2009, the same time QE started, and have tracked one another ever since.  Are the Bank of England seriously saying that their QE program also made the US stock market rise?

Another point worth noting is that the red line is denominated in pounds sterling, and the blue line US dollars.  At the start of the chart the exchange rate was about 2:1, in March 2009 about 1.35:1 and now it is about 1.57:1.  So although it looks like the FTSE 350 fell less and then outperformed the S&P 500, it didn't when you adjust for the difference in currency exchange rates and is still underperforming it by about 20%. 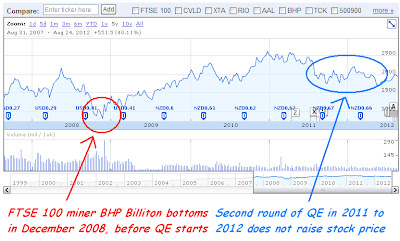 Another thing worth noting is that the UK FTSE index is very overweight with mining stocks, London being the traditional home of metals trading.  Very few of these companies actually mine anything in the UK and they sell their raw materials globally.  The above chart is the share price for BHP Billiton, one of the world's biggest miners.  Mining stocks bottomed around November / December 2008, right around the time the massive Chinese infrastructure stimulus was announced.  Mervyns more recent bouts of QE have done nothing boost the price of UK listed mining stocks in the face of a Chinese slowdown.

The truth about QE is that the Bank of England have purchased about as many government bonds as HM Treasury have issued since it started.  Whether Mervyn is simply doing it because the monetary policy text book says he should, or has more secretive deficit financing motives, we will probably not know for a long time to come.  However the Bank of England's central claim:

is highly dubious.  It is impossible to tell what would have happened to the share price of the big global companies listed on the London Stock Exchange in the absense of QE (most of whom can easily issue bonds and borrow in dollars or euros if they want to).  This report is more psychobabble from an overpaid economics lecturer and thinking people would be wise to pay very little attention to it.
Posted by Steven_L at 21:13